According to a survey done by Statistica, React Native is the most popular cross-platform mobile development framework. 42% of software & mobile app developers worldwide use this framework.

But why is this framework so popular among developers? And more so, why does this concern you & why should you choose React Native for your business mobile apps? 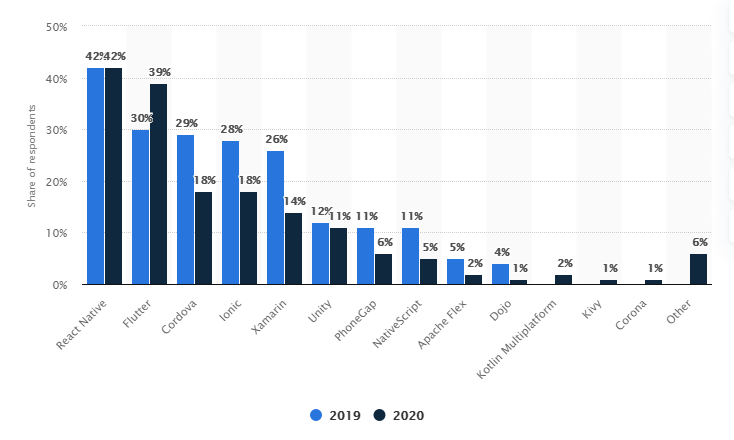 Here are the top 5 things any business considers when choosing an ideal framework for its mobile application.

React Native tops the chart when you consider all these factors. We will discuss all these in detail and more about why choose React Native for business mobile apps.

Here is a bit of flashback. Back when HTML5 was launched, companies actively started using it in their mobile apps especially after Facebook embraced it.

Zuckerberg, however, admitted later in an interview saying that – “The biggest mistake we made as a company was betting too much on HTML5 as opposed to Native”.

Besides Facebook, here are a few other examples of big companies using React Native for their mobile app.

Let’s say that you need a mobile app for your business. If you use native mobile app development technologies, you will have to create at least 2 different apps – for iOS and Android.

Though creating Native apps for your business has its own advantages, it comes with two obvious challenges – a higher cost of development and time to market. Developing two different apps will take time and will cost a lot of money!

This is where React Native & its cross-platform app development capabilities come in handy.

React Native allows cross-platform development. And this becomes one of the primary reasons why you should choose React Native for your business. Cross-platform basically allows you to reuse code and render it on both iOS & Android without sacrificing its User Experience (UX).

Here are a few features of using React Native for cross-platform development that you can’t ignore!

One of the primary reasons why a native code written for iOS doesn’t work on Android is – different data layers. React Native developers use different implementation strategies to cut short the development process.

One of them is using Redux with React Native.

Using Redux – a predictable state container with React Native allows you to easily track and implement changes in the application state. This means that you can create just one shared Data Layer both for Android & iOS.

Using this implementation, React Native developers can ensure the stability & performance of a piece of code without actually writing it for two different platforms.

React Native allows usage of the “Platform” module. This module basically detects the platform your app is running on and accordingly allows you to control its flow.

Using the “Platform” allows your team to render the appearance values of your app, especially when the changes in implementation are quite moderate.

With such features, React Native is easily one of your best choices for your business when it comes to cross-platform mobile app development. Its other cross-platform development features like platform-specific extensions allow your team to easily develop mobile apps that work for both iOS & Android.

Another factor that comes in when considering React Native for your business mobile app is its ability to create great UI/UX.

Every entrepreneur knows the importance of a good mobile app interface. A bad experience can not only throw off a prospect but also creates a bad reputation for your app.

Business owners often fear that the UI/UX of their app will suffer if they go for cross-platform app development. React Native definitely gives you at par performance when it comes to designing an intuitive UI & UX.

Since, how to create a great UX/UI in React Native for two entirely different layout systems of iOS & Android without actually creating separate codebases?

Features like these help your team to create a great UI/UX for your mobile app. It also helps you to give quick feedback without disrupting the entire app development timeline!

This is definitely one of the reasons why businesses prefer using React Native for their mobile apps.

Through the past decade, the market has become more volatile than ever and the attention span of your users has reduced significantly. This holds for your mobile app as well. You have to launch your app at the right time to gain popularity among your target audience.

React Native helps your team to quickly launch a mobile app for your business. There are multiple factors behind this. Here are a few of them.

The Popularity of React Native

So, where does this support for React Native help you in mobile development for your business?

Let’s say that you want to implement a feature in your app but your team gets stuck at a point. Chances are that someone else – be it an individual or a company, already have tried to face your problem and raised in the community for help.

Besides, it is not also because you can get quick fixes to a development problem that you might face during development. Huge community support of React Native means that it gets regular security updates and upgrades that help you to improve the performance of your app!

React Native is being actively adopted by startups, scaling businesses, and large-scale enterprises as their mobile app development framework. If you look at the post-development maintenance & upgradability, React Native offers a plethora of other options as well apart from official framework launches.

As such, React Native becomes a safe bet for a mobile app for your business.

Are you planning the development of a mobile app for your business? If you are, contact us!

Resourcifi is an award-winning Staff Augmentation company. We have set up teams of expert web & mobile app developers after years of vetting. Hire React Native developers from Resourcifi using our easy engaging models.

Modern-day technology has changed the way people connect with others. The dating app development industry…

Ever since the digital era, the fitness app development industry has gone through a digital…

You are planning for an eLearning app. There’s nothing to worry about if money matters…